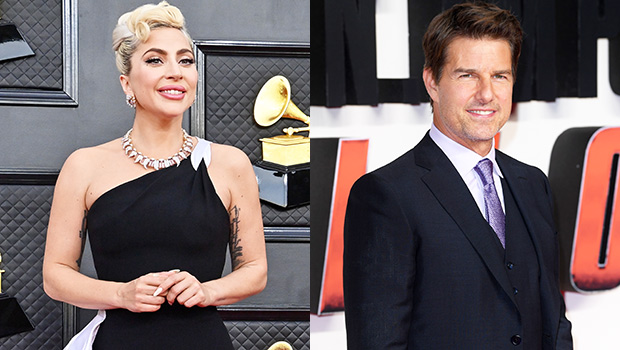 Tom Cruise kissing Lady Gaga in a tuxedo after her show in Las Vegas might seem like an entertainment fever dream, but such a thing happened on Sunday (May. 1). Tom, 59, made time out of his busy schedule to see Gaga, 36, during her Jazz & Piano residency at Dolby Live theater inside the Park MGM resort. After the show, the Top Gun: Maverick star made his way backstage to meet up with Gaga, and the two had a tender moment. “Thank you for coming to the show last night,” Gaga captioned the photos of her kissing Tom on the cheek, a gesture Tom returned. “I love you, my friend.”

Gaga’s run-in with Tom comes less than a week after she announced “Hold My Hand,” a song she recorded for his new movie. “When I wrote this song for Top Gun: Maverick, I didn’t even realize the multiple layers it spanned across the film’s heart, my own psyche, and the nature of the world we’ve been living in,” Gaga captioned the shot of the single’s cover art. Gaga was living her full 80’s fantasy in the photo, rocking a white tank-top, dog tags, and a flight suit pulled down to her waist as she lay against the side of a plane.

“I’ve been working on it for years, perfecting it, trying to make it ours,” continued Gaga. “ I wanted to make music into a song where we share our deep need to both be understood and try to understand each other—a longing to be close when we feel so far away and an ability to celebrate life’s heroes. I’m so grateful to Tom and Hans and Joe for this opportunity—and it’s been a beautiful experience working with them.” Gaga credited her longtime collaborator BloodPop, Ben Rice, and “everyone else who worked on it” for helping to make the song come true. “This song is a love letter to the world during and after a very hard time. I’ve wanted you to hear it for so long.”

Tom Cruise Then & Now: See Photos Of The Actor Through The Years

A few days after announcing the song, Gaga gave fans the first taste of the song and the black-and-white video. In the few seconds of the teaser, fans heard Gaga’s voice (“I won’t let go till the end”) before the 1980’s dramatic drum pause (think the moment before the drums kick in during Phil Collins’ “In The Air Tonight”). “Just take the oscar,” commented the @GagagDaily fan account.